This wiki was just a stub until July 2006. It has been reorganized, and all are invited to contribute.

Seems the main page is the only page. On another side Pinoy_atheist is not recognized anymore. No more atheists in the world ? except me, of course. --Rabienus 13:19, 2 Jan 2006 (UTC)

If this is for Filipino atheists - like these people - it should be renamed. Otherwise there shouldn't be reference to Filipinos (or other specific nationalities) on the main page. --Singkong2005 08:13, 4 Jan 2006 (UTC)

I'm a devout agnostic, former husband to a Pilipino [&/or -a] woman, Tarlaqueño. Does that qualify??

I have made some small updates but this site has potential. I took some of the material from my site www.atheisttoolbox.com but I have written extensively on Biblical research, Logic, Evolution etc.

Feel free to use as much of it as you want but please add a link to my site if you do.

Since I assume y'all don't want the Wikia logo to remain indefinitely, here's my genuinely-piss-poor, under-a-minute until-something-better comes-along stab at a logo: 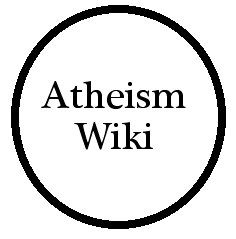 How about this one (based on the Atheist Atom from Wikimedia Commons):

Why do you deny the truth?

Why do you deny the truth about God by saying he does not exist?

Atheism is nothing but a fight against morality, Christianity and God while buffering oneself behind the fanciful notion of the non-existence of God, and often satan, in order to avoid the appearance of the inevitable linkage with satan.

Yerranos has been blocked from Liberapedia for annoying people. Proxima Centauri 07:55, 22 June 2008 (UTC)

I'm not sure that "annoying people" is a good enough reason to ban somebody. If he has a different point of view let's hear it. If he keeps saying garbage then ignore him. Frankly I'm leaning towards the idea that he's a troll. --R Fitzroy 11:47, 22 June 2008 (UTC)

I feel he's been playing on other people's sensitivities on Liberapedia. If he starts that here you will certainly have reason to block him. He's been altering articles here. The articles have been reverted. I'm certainly not suggesting that anyone on Liberapedia should unblock him. You decide what to do here. It's your Wiki. If you don't want to block him unless he does anything worse that's reasonasble. Proxima Centauri 11:56, 22 June 2008 (UTC)

OK, I've gone out on a limb and given us some objectives and a point of view. That's a bit cheeky I know - but it gets the ball rolling. If anybody doesn't like them then please revert. R Fitzroy 07:17, 23 June 2008 (UTC)

I then got a bit carried away and created a blocking policy and added some debate standards. Again in order to get debate started.R Fitzroy 07:33, 23 June 2008 (UTC)

Has the community here reached a consensus on who will be become the admin(s)? its fine if its more then 1 person, infact its kinda encouraged that its more then 1 person, so that there is some form of accountability and check/balance like system. post the names here, and i'll contact the staff to make it happen asap. --Uberfuzzy 01:24, 29 June 2008 (UTC)

User:R Fitzroy and I both want to be sysops. His article on Blocking policies is reasonable. I’ve made a few amendments. I can’t consult anyone else. All other contributors I’ve found in Recent changes are Wikia admins or vandals. Proxima Centauri 07:47, 29 June 2008 (UTC)

The section on the front page says "Atheists as a rule want to be moral. Christians want to please their imaginary friend, God. Atheists like to please real human beings round them."

You all like to take advantage of the generally docile nature of Christians and attack us; one of your main categories is Christianity. How else would that be explained if not just through intolerance and opportunism. Jesus loves you, but from what I have seen this site- and this philosophy- is a load of shit, and dont tell me not to swear because the first paragraph of your religion article says that religion is shit. Explain that shit away.

By no means all Christians are gentle or docile. See Conservapedia for an example of less docile Christians. Proxima Centauri 09:02, 14 January 2009 (UTC)

But most are. Most conservatives gag themselves at the crystallized shit of conservapedia, and the values of christianity would assert my claims.

A letter from RationalWiki

To all users of this Wiki

After reading through a number of the articles found on this Wiki, I must profess that I am utterly impressed by your clear details and informative articles. Due to similarities in the structure of our Wikis, I am here to propose a possible site-to-site link to allow for the more effective exchange of information. I am not asking for a merger, naturally, but I feel that RationalWiki and this Atheism Wiki could help each other build, possibly to being even more informative than we already are.

Feel free to discess this move. I feel confident that we at RW would be more than happy to work with this Wiki, and I hope you feel the same way.

Hello Javascap. Thank you for your kind words. Actually we're not that active so it would be nice to have some new input. However, from what I know of Rationalwiki my impression is that it has a rather ambivalent attitude to explicit atheism, and I have the impression that some of its editors are firm theists. And such people might take issue with the idea of associating with an atheist site. Equally, I'm sure that other members of your site would take issue with Rationalwiki being associated with, for the sake of argument, a Christian wiki. (To digress for a moment, while I am sure that Rationalwiki sees this diversity as a strength, I can't help feeling that this ambiguity at its heart may eventually slow its growth.)
On another point, could I just ask if you are speaking on behalf of Rationalwiki or if this is a private initiative?
In any event, I think that some Rationalwiki members do post here sporadically anyway. So I guess that I'm not quite sure what you are suggesting. Could you expand a bit? Thanks a lot for bringing this issue up and if we could, in fact, find some way to mutually co-operate that would be great.R Fitzroy 21:27, 27 January 2009 (UTC)

Retrieved from "https://atheism.wikia.org/wiki/Talk:Main_Page?oldid=15219"
Community content is available under CC-BY-SA unless otherwise noted.